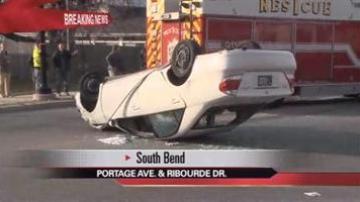 SOUTH BEND, Ind. -- Emergency crews were on scene of a rollover accident in South Bend.

The accident happened around 2:30 p.m. Tuesday on Portage Avenue near Lathrop Street.

At least one person was taken to the hospital.

Witnesses said the crash started near a gas station at Cleveland and Portage. The two cars, one red and one white, were driving down the road when the white car hit the curb and bounced off the median.

The impact smashed the bricks along the median and sent the car into the air and it landed upside down.

Police have not been able to locate the red car allegedly involved in the accident.