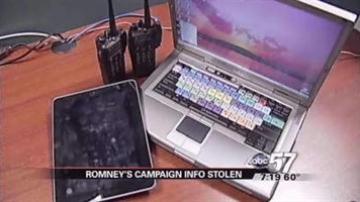 SAN DIEGO, Calif. -- The campaign trail has been vicious this year, but has it gone as far as theft?

Two campaign aids for Mitt Romney parked a car at a hotel in San Diego, and when they came back some of their valuables were missing.

There is no indication of who stole the items yet, but there is some speculation going around that it was a targeted theft.

Carl Luna, a Political Analyst said, "This could just be a coincidence, then again, given this campaign season and how negative it's been, dirty tricks are not alien to American politics."

Romney's campaign spokesman said the burglary is unfortunate and an inconvenience, but he is not concerned about the stolen information.