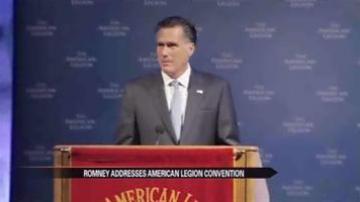 Indianapolis, IN -- Presidential hopeful Mitt Romney spoke to a receptive audience of veterans in downtown Indianapolis today; just 24 hours before he officially accepts his party's nomination.

"They've served their county. They want to get back to work. They need and deserve good jobs," Romney said. "This President's greatest failure is that he's not delivered those jobs. As President, I will get America to work again."

"Where he's dodged the tough choices, we'll confront them head on," Romney said. "And deliver a better future for Americans of this generation, and the next."