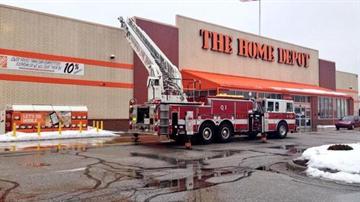 MISHAWAKA, Ind. -- The Home Depot in Mishawaka was evacuated after the weight of snow and rainwater caused damage to the roof.

At 11 a.m., Mishawaka's building inspector, shoppers, and store associates inside the Home Depot heard the roof's trusses begin to bend.

"Our inspection chief was in the building and he said it was so loud that people just started to run to the opposite side of the building, it was pretty loud and scary," said Captain Ray Schultz of the Mishawaka Fire Department.

The fire department found structural damage to the roof because of the weather.

"As it melts and as it rains, all of the water is coming to one side, and it is not draining. It's frozen. There is snow around it. So much weight, and the roof is slanted towards the drain, the drains are plugged so all the water is collecting around that area," said Schultz.

The fire department has deemed it too dangerous to be inside.

"The roof is buckled in a couple of places, it is pretty significant," said Schultz.

According to representatives with Home Depot's corporate office, the store will be closed until all the snow is removed from the roof.

They will re-inspect the building with a fire marshal and will have to pass an inspection by a structural engineer before any customer or associate is allowed to enter.

"We came to pick up a brand new toilet and we drove all the way here and there is a note hanging on the door they are closed! We don't really know anything, it is a surprise to us. We will probably have to go to Menards," said Deborah Reed of Elkhart.

"We drove here, it took a little over an hour to get here - and the store is closed," said Barbara Rogers of Bridgman, Michigan.

Home Depot has hired a company to clear the roof.