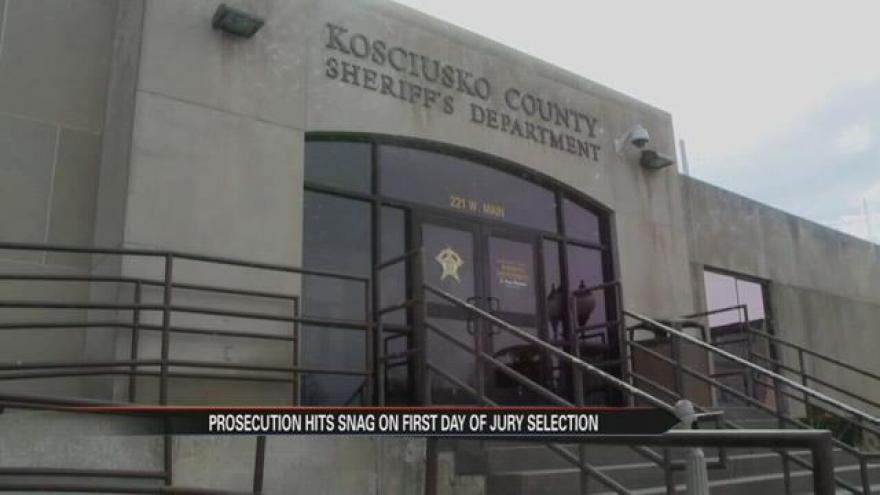 A trial off track: the high profile case against the Sheriff of Kosciusko County has been delayed.

Aaron Rovenstine is accused of bribery, intimidation, and official misconduct.

Tuesday, the prosecution hit a little snag, on a day that was supposed to mark the first day of jury selection.

It took over two hours for the defense, prosecution, and two different judges to make a decision on whether or not the case could continue.

ABC57 reported earlier in the month, Chipman would not be lead on this case due to health issues.  His two deputies, Matt Sarber and Tami Napier would replace him.

The defense says he failed to file progress reports and an extension for his term as special prosecutor. And this motion shocked the courtroom.

Judge Michael Reed denied the defense's notion, however Judge Evan Roberts, from Elkhart, says this is a "procedural defect."

He granted the defense 30 days to appeal Judge Reed's decision to the Indiana Supreme Court, thereby delaying the jury selection and trial.

"It took everyone by surprise," says Napier.

Neither of them saw this coming,.

"That time period they were talking about, when it should have been filed, they were involved in the case when we were doing discovery," explains Sarber. "So it did catch us off guard."

But the case will continue, it just may take a little bit longer.

It's a case that keeps dragging out. So much, that the community has began to forget about it.

"There hasn't been a whole lot of talk about it recently," says Mentone resident Emily Dennie. "But I'm sure there will be now that it's starting back up."

As a Kosciusko County resident, it's been awhile since she's heard about the Rovenstine trial.

But this delay doesn't shock her.

"It doesn't surprise me, everyone's going to use whatever they may have in their back pocket to make it go their way," says Dennie.

She isn't the only one.

Kharis Schmidt lives in Warsaw, and says she wants answers, so that this can be finally put to rest.

"It's hard enough to trust these people anyway, and then you look at a larger, national scale, and we're distrusting of police anyway," she says.

When it's over, Warsaw can shed this spotlight, that she feels it doesn't deserve.