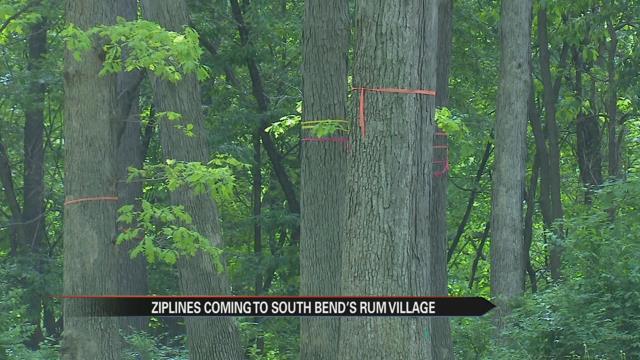 It will include zip lines, obstacle courses, and a birds eye view of South Bend’s nature preserve.

At first, director of Rum Village and naturalist Gary Harrington was skeptical of the project,

“It’s my job to protect the floor and the fauna, so I had to make sure going into those trees and building this on the trees would not injure them,” Harrington said.

But now, just a few days before the platforms go around the trees, he’s on board.

Steven Doniger is owner of Edge Adventure Parks, the company developing the park.

“It’s a combination of different obstacles for people from little tunnel crawls and zig -bridges and zip lines,” Doniger said.

The park will go up to 60 feet high and cover at least three acres of the park.

He wants to keep them that way, so the platforms will be built around the trees rather than through them.

Edge Adventures is a private company, so no taxpayer money is going into the project.

Still, park execs still hope to capitalize on it.

“It really is a win-win situation for us,” South Bend Deputy Park Director Susan O’Connor said.

When it’s finished, most likely in late June, it’ll offer a birds eye view of the animals, plants and everything in between.

That's what ultimately convinced the protector of the park to climb on board.

“It’ll be better for spotting birds, and just taking in the beauty of the park in general,” Harrington said.