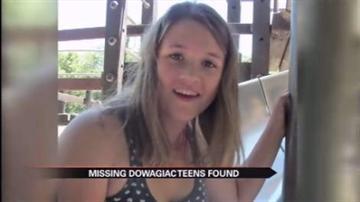 DOWAGIAC, Mich. -- Tuesday, Dowagiac Police found two girls who had been reported missing on Monday. The girls disappeared from a park on Mill Pond and only came out when one of them got sick.

"She's never done anything like this before; I was really surprised when she didn't get off the bus yesterday; so I was totally shocked,” said Hammond.

A friend from school was the last person to see her at James Heddon Park on Mill Pond.

"She took off running through the woods and they had police out there looking, and dogs and lost their scent,” said Hammond.

Things didn’t add up. Officers didn't believe they were looking for runaways.

Johnson’s family members say she was a happy child.

On Sunday she picked flowers for her mother and tilled the garden.

She was even supposed to be presented with one of the end of the year awards at her middle school at Tuesday night’s ceremony.

According to a note found in her backpack left behind at the pond, she was headed to South Dakota.

"It may start off as a runaway, at that point they are looking for some kind of refuge somewhere to go, somebody who will take them in; and who knows who they are getting a hold of at that point,” said Grinnewald.

The girls turned themselves in on Tuesday.

They were hiding in a vacant home overnight when Johnson’s friend began to feel sick.

The girl is being checked out at the hospital.

The girls could be charged with breaking into the vacant home.