Running the 'Doomsday Clock' is a full-time job. Really. 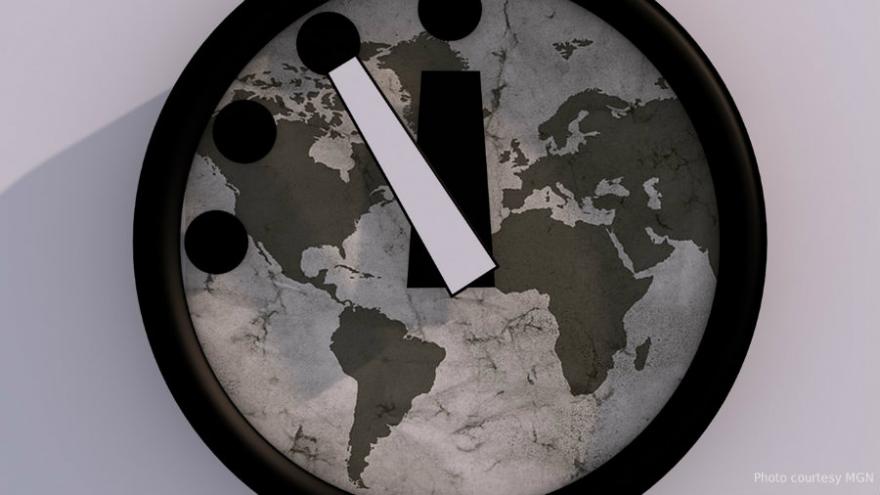 (CNN) -- The group of scientists and scholars that make up the Bulletin of the Atomic Scientists fulfilled its most public duty this week. The group moved the hand forward on its famous "Doomsday Clock" to two minutes to midnight, indicating the planet has inched ever so closer to an apocalyptic end.

But is that all that they do? Is managing a clock -- even one that's symbolically telling us how close humanity is to its ultimate destruction -- really a full-time job?

"We're really busy," she told CNN, adding that they do much more than just move clock hands around.

The Bulletin, based in Chicago, strives to "reach policy leaders and audiences around the world with information and analysis about efforts to address the dangers and prevent catastrophe," it says on its website.

The Bulletin's 12 staff members help scientists and scholars to do more than just track nuclear threats to the planet. They also keep up with the threats posed by climate change and emerging technology. They put out an award-winning digital subscription journal which publishes every other month. They maintain a public-access website that draws about 250,000 visitors a month.

"We really rely on the editorial contributions from our writers as well as our board members," Bronson said.

They nurture aspiring scientists and security experts with student fellowships. And they present awards to young journalists.

Born at the end of war

This team, dedicated to forestalling a nuclear apocalypse, was put together at the end of World War II by a group of people who knew a thing or two about the destructive power of nukes -- the scientists, engineers and various experts who worked on the Manhattan Project, which produced the first atomic bombs.

"They knew about the horrible effects of these new weapons and devoted themselves to warning the public about the consequences of using them," the Bulletin's website says.

They were worried about something else, too: military secrecy. They feared world leaders would start nuclear wars without citizens being fully informed of what was happening.

The idea for a doomsday clock to represent humanity's distance from devastation came from the late artist Martyl Langsdorf, who sketched out the clock that first graced the cover of Bulletin's magazine in 1947. That first clock was set to seven minutes to midnight.

Langsdorf initially thought about using the letter U (for uranium) on the cover, but she changed her mind after listening to the debates of the scientists who created the nukes.

"As she listened more intently to their conversations, though, she soon realized that it was the atomic scientists' urgency about the looming dangers of this new technology that was most compelling," reads the Bulletin's tribute to Langsdorf on its website. "So she drew the hands of a clock ticking down to midnight. Like the countdown to an atomic bomb explosion, it suggested the destruction that awaited if no one took action to stop it."

The decision to move the clock's minute hand is a weighty one, with the Bulletin's Science and Security Board meeting twice a year -- once in June and once in November -- to talk about events in the world and move the clock in January if needed. The Science and Security Board makes its decision in consultation with the Bulletin's Board of Sponsors, which boasts 15 Nobel Laureates.

Bronson said the clock has been moved for both nuclear dangers and the threat from climate change. Emerging technology hasn't caused the clock to move ... yet. But the Bulletin keeps its eye on synthetic biology, artificial intelligence and cyberhacking to assess their threat level to humanity.

The last time the clock was as close to midnight as it is now was in 1953, when the US and the Soviet Union were engaged in a nuclear arms race.