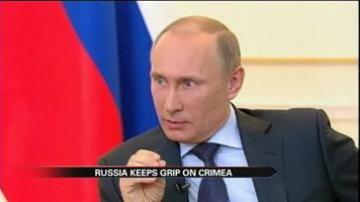 The crowd waved Russian flags as a Russian navy band and dancers performed on stage.

Russian president Vladimir Putin supports the referendum but the Obama Administration says the United States will not recognize the vote as legal.

"It will not be viewed as the United States as legitimate because it is inconsistent with the Ukrainian constitution which makes clear that any change in Ukraine borders has to be decided by all of Ukraine," said White House Spokesman Jay Carney.

The White House says Russia should work with the international community to resolve this crisis peacefully and allow international monitors to go into Ukraine.

Putin shows no signs of backing down and some say he should not.