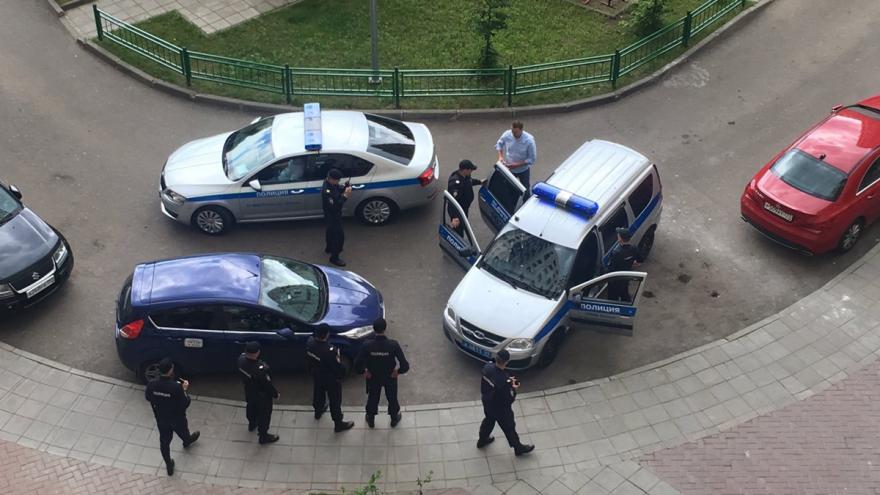 (CNN) -- Russian opposition leader Alexey Navalny was detained by authorities as thousands of protesters engaged in a day of nationwide anti-corruption demonstrations clashed with police on Monday.

Navalny's wife, Yulia, reported news of his detention at his home in Moscow on his official Twitter feed. She also posted a picture showing police officers at the scene.

He had planned to attend a rally in the capital, but is now facing a possible 30-day jail term, according to a post on Twitter by his lawyer, Vadim Kobzev.

State news agency Tass confirmed he had been arrested, reporting that he faces allegations of violating laws governing demonstrations.

Navalny, 41, has been mobilizing support on social networks in the hope the rallies will rattle the Kremlin, as those held earlier this year did.

Around 900 people were arrested at protests Monday in Russia's capital and second city according to OVD -- an independent group monitoring arrests.

OVD reported that 600 people had been detained in Moscow and 300 in St. Petersburg.

Hours earlier, authorities had declared that the planned rally in the Russian capital was illegal.

"Law enforcement agencies will be forced to take all necessary measures to stop provocations, mass unrest or any actions leading to a violation of public security, creating conditions for threatening the life and health of citizens," the Prosecutor General said in a statement.

Photographs and videos posted on Twitter showed large numbers of police at Tverskaya Street in the capital, a main thoroughfare near the Kremlin. The protesters were shouting "Putin is a thief," "Putin out" and "Russia without thieves." Pictures on social media showed police putting gas masks on.

Navalny's press secretary, Kira Yarmysh, posted on Twitter that tear gas had been used against her.

Teenager Anna Meigan was detained as she protested in Moscow.

"My sister and I went to an anti-corruption rally. We left the Pushkinskaya metro station and after five minutes the riot police ran up to us and dragged us to the police bus, which after a few minutes was already crowded with people," the 18-year-old told CNN via text message.

There was also a large police presence in St. Petersburg, where protesters chanted "shame" during a rally at the Field of Mars park.

More than 200 towns and cities were signed up for protest rallies to mark the Russia Day public holiday according to Navalny's social media. The opposition leader -- who plans to run against Vladimir Putin in next year's presidential election -- said earlier they would go ahead regardless of whether the government allowed them or not.

Navalny was arrested, along with hundreds of others, and was jailed for 15 days after being convicted of disobeying a police officer.

His election campaign comes despite him being convicted of embezzlement and given a suspended sentence in February. Russian laws prohibit convicted people from running for office. Navalny says the charges against him are politically motivated.