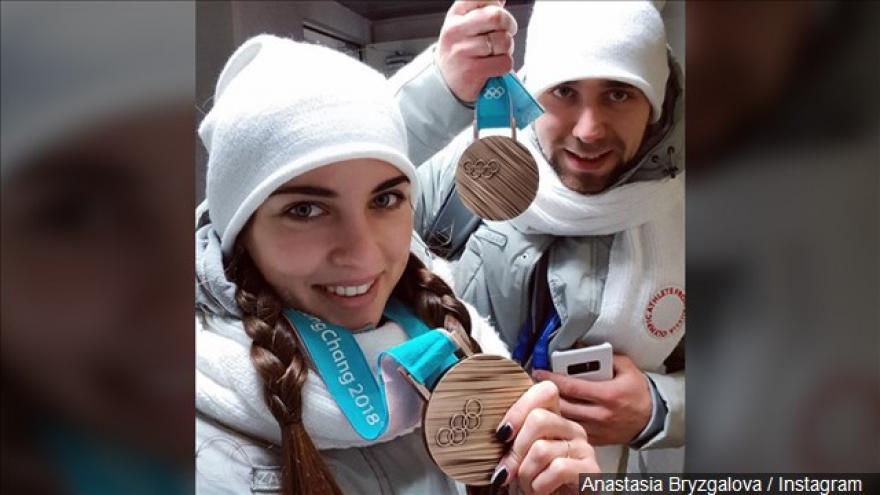 (CNN) -- Two Russian curlers have given back their Winter Olympic bronze medals after one of them, Alexsander Krushelnitsky, tested positive for the banned substance meldonium.

Krushelnitsky, and his partner in the doubles curling event, Anastasia Bryzgalova, voluntarily gave back the medals they won last week in Pyeongchang, Valentina Parinova, spokeswoman for the Russian Curling Federation, told broadcaster Russia-1.

Krushelnitsky had filed a case with the Court of Arbitration for Sport (CAS) after an initial positive doping test, but dropped it Thursday after failing a second test. He said while he had not knowingly violated doping rules, it was pointless to contest the results.

"I have never either violated the rules of sports or used doping," Krushelnitsky said in a statement published by Russian state news agency TASS.

"We won a bronze medal by hard work and constant training. On my part, I admit that there has been a formal violation of the current anti-doping rules."

Krushelnitsky said it "would be stupid to deny it after two tests proved positive," adding "the samples tested had been collected during the Olympic Games and I am ready to face the verdict that is usually announced in such cases.

"Having weighed up the pros and cons, I decided to withdraw my case from CAS. I believe that a hearing would be useless under the current rules," he said.

In a statement to CNN, CAS said the "case is not withdrawn but the hearing is now canceled. CAS will render a decision in the afternoon."

An investigation will be carried out by the World Curling Federation, and Krushelnitckii said he was positive it will find him innocent.

According to TASS, Russia's Curling Federation has asked the country's investigative committee to look into the possibility of Krushelnitsky's food or drinks being spiked, including requesting CCTV footage from South Korea and Japan, where Russian curlers trained ahead of the Olympics.

Intense attention has been paid to Russian athletes at this year's Olympics, after the country was banned from competing due to allegations of widespread, state-sponsored doping.

More than 160 athletes who could prove they were clean from doping are competing as Olympic Athletes from Russia (OAR), under the Olympic flag and anthem.