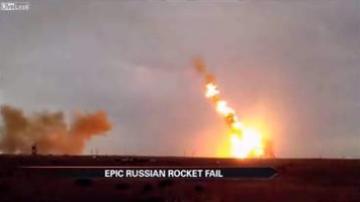 RUSSIA — A unmanned Russian rocket launch failed to make orbit.  About $250 million worth of equipment was lost in the launch. But some say it's a small price to pay for failure.

Just seconds after launch, the rocket veered off course and then exploded into a fireball.

In 2010, a Russian rocket carrying three satellites crashed in the Pacific Ocean.