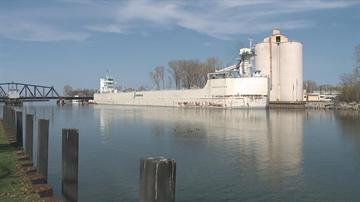 SAINT JOSEPH, Mich.  - The St. Joseph Harbor is open for business but not everyone some can participate.

The Innovation, a commercial boat carrying 7500 tons of concrete, got in the harbor dropped its load Thursday at the LaFarge dock in St. Joseph.

The Innovation runs about 15-feet under the surface of the channel, barely missing the bottom. MCM Marine measured the channel at 17-feet deep last week.

“St Joe, in itself, can be stressful but that adds to it,” said ten-year ship captain Steve Stanek at the LaFarge dock Thursday. With only two-feed of leeway, nothing can go wrong.

According to LaFarge, without emergency dredging in January the harbor wouldn’t be able to take any ship. The other two docks in town, though, aren’t seeing any of the residual effect from that dredge.

“Seeing them get limestone, while I’m happy for them, I’m a little bit envious,” said Pete Burghoff, owner of Dock 63 in St. Joseph. Berghoff needs a minimum of 18-feet minimum to get a boat to Dock 63.

Thursday, Dock 63 had virtually no product. “It’s like going to the grocery store with nothing on the shelves,” said Berghoff.

In January, the ship Berghoff had scheduled to come in was stuck in the lake for two days because conditions weren’t correct for a delivery. The ship eventually left without leaving a load at Dock 63

Berghoff is now losing money every day. He said, other than core contractors, he needs to turn customers away. “I’m telling them ‘no I’m sorry’,” he said. “It pains me to do it but I have to.”

LaFarge can get some boats in at a 17-foot depth but it could all change fast. “Doesn’t take much when you’re right on the edge,” said Stanek. “All it takes is one good storm and you may not be able to make it in.”

According to the Army Corps of Engineers, the Saint Joseph Harbor will be getting dredged again by May 1st. Berghoff is hoping the work gets done sooner than that.