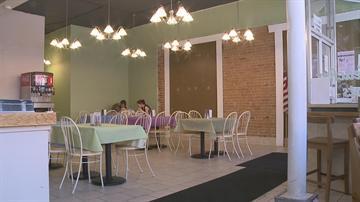 SAINT JOSEPH, Mich. - Several downtown merchants say business has been awful this week and are expecting to lose money this Memorial Day weekend. They say the Senior PGA Championship is not what they expected.

At noon on Friday Vitale’s Famous Subs sat mostly empty. “We have no lunch hour,” said owner Jason Rosenthal. “It’s 12 right now (and) we have two people in my sandwich shop. It’s just not how it’s supposed to be.”

Rosenthal said any other Friday and the line is out the door. He said Thursday was the worst lunch business he’s ever done. “We’re doing less business instead of more.”

Rosenthal thinks locals are avoiding downtown because of the PGA. “Every one of my friends they say ‘oh we’re going to avoid downtown it’s going to be a mad house,’” he said.  “Yesterday it looked like we should have had tumbleweeds go down the street.”

“I was joking to somebody across the street ‘there’s so many people out here I can’t see you,” said Tom Ives, owner of US Cellular downtown. “It was a joke.”

Ives thought he was planning for hundreds and ran special promotions. “We were having a raffle for White Sox tickets and maybe three people signed up,” he said.

Rosenthal is staying optimistic. “I’m one of the lucky guys,” he said. “I didn’t order that much more than I was going to need.”