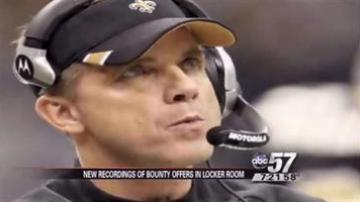 NEW ORLEANS -- New recordings of NFL misconduct is being released.

The NFL bounty scandal had a lot of speculation as to what was actually said and encouraged in the New Orleans Saints locker room.

But footage of suspended Defensive Coordinator Gregg Willaims has given an answer to his intentions of offering bounties.

Particularly in a playoff game against the 49ers.