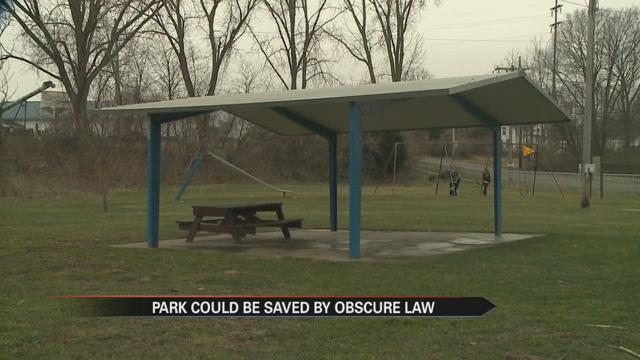 Tensions were high Monday night as Cassopolis Village residents pleaded with the village council to not sell Southside Park.

“The park is a community park,” another resident said. “We cannot sell the park.”

“If you destroy [the park] and just hand it over, all those memories are just gonna be erased,” an 11-year-old resident said to the council.

The council has been looking to sell the park to nearby agricultural business Community Mills – which stands right behind the park.

Throughout the last few months, news of the possible sale has brought many residents forward to voice their concerns.

“I have been going to this park for like nine years now,” Cassopolis resident Jadin Wolfe, 11, said. “I just can’t see it go away to Community Mills, like, not that easy. I’m gonna put up a fight for it.

Wolfe and her friend wrote a letter to the village council and collected dozens of signatures from classmates who supported keeping the park.

But at Monday’s meeting, after hearing nine concerned residents speak against selling the park, village trustee Geraldine Sims announced a revelation – the council could not vote to sell the park.

“[The council] didn’t know what the general village act was, and I researched it and found out,” Sims said.

Sims discovered a law that states, “A public park shall not be sold without the consent of a majority of the electors of the village voting on the question at an election.”

“Once the kids start coming by and grown ups start knocking on their doors and phone calls, then I had to start doing some research,” Sims said.

Her research paid off because it forced the village council to unanimously vote to table the sale of Southside Park indefinitely.

The decision was met with applause from the residents in attendance.

“And now we going to move ahead and see if we can get this park done the way it should’ve been done four or five years ago,” Sims said.

Village council president Dianna McGrew said she has to consult with the village attorney and village manager to figure out what the next step is for the park. She encouraged residents to “stay tuned” because she said the council was not previously aware of the law.

Though the ultimate fate of the only park on the south side of Cassopolis is still unknown, many residents left the meeting happy with the news.