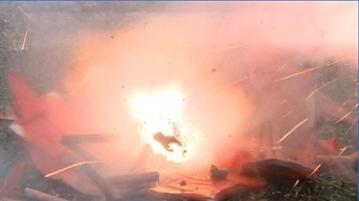 LA PORTE, Ind. -- To some, the sound of fireworks, is also the sound of cold hard cash. The fourth of July is fast approaching and firework stands across Michiana are seeing their business skyrocket, including one in La Porte County that's been around for more than 35 years.

In just two days, fireworks will light up the sky.

For those that sell them, this time of the year is like a gift.

"There are so many different variations; it's almost like opening up a surprise," Kenneth Carlson, owner of Lakeland Fireworks Co., said.

He's been selling fireworks in La Porte for the last 35 years, but it's just part of his business. He also fixes transmissions right next door at Pine Lake Service Center.

"This is a cushion that I've come to depend on," Carlson said. "Because the economy has become really erratic."

Last summer's drought was difficult on sales, but this year, he's already seen double the amount of customers.

In just two weeks time, he's doing enough business to keep him afloat for the rest of the year. That bodes well not only for him, but the rest of Michiana as well.

"It's different. It's new and fresh to you, because you haven't seen it for along time. The same excitement comes back, every single time."