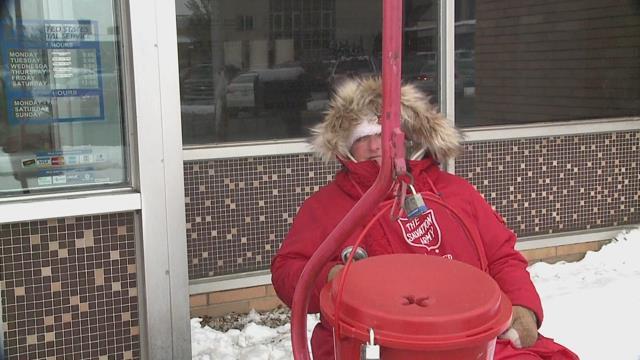 Last year, The Salvation Army in LaPorte raised $80,000 during their Red Kettle Campaign.

This holiday season, they have raised tens of thousands of dollars again but it’s still not as much as they were hoping for.

This year The Salvation Army raised their goal to $85,000, but with just a couple weeks left to donate to the Red Kettle Campaign, they are $10,000 behind.

On Wednesday, bell ringers battled the brutal cold in hopes of raising funds for those less fortunate during the holiday season.

The Salvation Army has 11 locations where people can drop money into those buckets.

But this year, officials say the weather has put a damper on people’s willingness to be outside.

Fewer volunteers and paid bell ringers means the Salvation Army hasn’t been able to cover all of their locations.

And while monetary donations have been scarce, the community is still chipping in where they can.

“We could still use more of those to help people’s Christmas be better but as far as food donations and toy donations, it has been about the same as last year and it’s actually a wonderful gift that we have and you can see some of the different donations we have here for our adopt a families and the things that people have bought and that’s been wonderful,” said Captain Sarah Windell with The Salvation Army.

Windell says several programs are in danger of being cut if they don’t meet their fundraising goal.