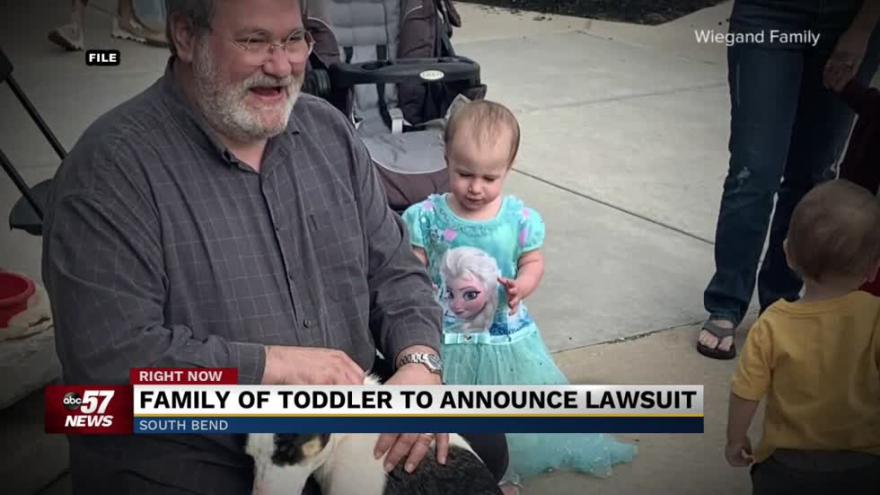 Sam Anello, the Michiana grandfather who was holding Chloe Wiegand when she fell to her death from a cruise ship window, has pleaded guilty in Puerto Rico, the family spokesperson said.

Anello pleaded guilty to negligent homicide. He will not serve any jail time and probation will be served in Indiana.

"This decision was an incredibly difficult one for Sam and the family, but because the plea agreement includes no jail time and no admission of facts, it was decided the plea deal is in the best interests of the family so that they can close this horrible chapter and turn their focus to mourning Chloe and fighting for cruise passenger safety by raising awareness about the need for all common carriers to adhere to window fall prevention laws designed to protect children from falling from windows,” said Michael Winkleman, the attorney for the Wiegand family.

The family is suing Royal Caribbean over the incident.

“The civil lawsuit against Royal Caribbean continues. We are deep into the process of discovery in the Civil case having already taken several depositions and numerous upcoming depositions including the Captain of the ship. Sadly, all of the discovery and evidence taken so far in the case confirms that this was a tragic, preventable accident and that there are absolutely no grounds to bring criminal charges against Sam Anello,” WInkleman.

Anello issued a statement in February 2020 after it was announced he planned to plead guilty.

It is difficult to walk by a large group of people barraging me with so many questions and walk by as if I am ignoring them. On the advice of many, I have had to do just that and I want to apologize to all of you for being, what may seem rude. I make these statements today in a small part to correct that. I am still being advised to be quiet, but in light of recent events I feel I need to say something to all of you.

First of all, I need to express my deepest gratitude to all of the kind people who have stopped me in public places, or as I walk down a street both in Puerto Rico and back at home. People who have embraced me and prayed for me and my family. They have really been a crucial source for all of us to draw strength from and it has been a blessing.

I have also received letters from around the world with prayers and biblical passages in a wonderful effort to support us. Some letters have been from people with tragic stories of their own sharing their sympathies. One woman told me the tragic story of how she and her husband lost their baby girl when her husband’s practice golf ball ricocheted off of a tree. Another older gentleman told the story of how he and his recently deceased wife lost their youngest baby 25 years ago when they placed her in the grocery portion of a shopping cart and the toddler leaned over and fell out. Both letters expressed how horrible it would have been if they had to face prosecution after these unthinkable accidents, but I really only think of Chloe. They probably understand that. I wish all of them well.

As for that horrible day, I can only tell you what I experienced. I was focused on Chloe the whole time I was with her. As walked with her I also saw that the ship deck was surrounded by a wall of glass. In my experience, any elevated public place I’ve been with that much glass has always been a protective barrier. Whether it’s the hockey rink at Notre Dame where the glass not only provides a barrier between the fans and a hockey puck but also provides a barrier between their two rinks for which fans can lean in and view the Olympic rink below. Or the 15-story building I work in where the glass is firmly affixed preventing accidents like this. From my point of view, at the moment the accident happened, it was as if this wall of protective glass disappeared. I was in complete disbelief. It was a nightmare of the likes I could never have imagined before. I wasn’t drinking and I wasn’t dangling her out of a window. I just wanted to knock on the glass with her as we did together so many times before. I was just so horribly wrong about our surroundings. I was placed in charge of keeping my beautiful granddaughter safe and I failed. It will always be a constant nightmare every day and every night for the rest of my life.

I took a plea deal today to try to help end part of this nightmare for my family, if possible. The support they continue to give me has been beyond overwhelming and I can’t tell you how grateful I am for them.

Going forward, justice for Chloe must include attention being given to provide the safety measures so very needed on Freedom of the Sea. We need to make sure nothing like this will ever happen to another precious baby, or anyone else for that matter, ever again. There are clear safety measures that the cruise line has demonstrated they know are necessary by implementing them on other ships but have neglected on this one.

I love you and miss you, Chloe, beyond measure.