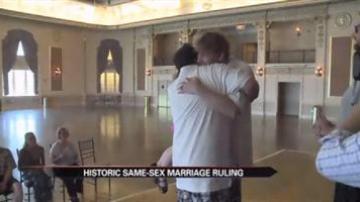 ELKHART, Ind. -- Paradigm Brewing Company decided to marry same-sex couples for free at their bar from Wednesday through Saturday since one of the owners is an ordained minister.

Brandon Stanley, owner of Paradigm Brewing Company and ordained minister says this is a way for him to be a part of history.

“This is our chance to get behind and support a cause that’s important to everybody,” says Stanley.

But that's just one way couples are celebrating the court ruling that said Indiana's ban on same-sex marriage is unconstitutional.

ABC 57 was also invited to the official wedding of David Schmokel and Greg Bovo, who received the first same-sex marriage certificate in St. Joseph County, Indiana.

Their ceremony was held at the Palait ballroom. Their 5-year-old daughter was by their side.

The two have been together for 25 years and held a much larger commitment ceremony last year but they say, making it official felt good.

"We are a complete family. Complete and legal," said Schmokel.

The state's Attorney General filed an emergency motion for a stay pending the outcome of an appeal.