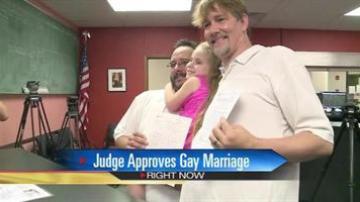 ST. JOSEPH COUNTY, Ind. -- Not long after a federal court struck down Indiana's ban on same-sex marriage as unconstitutional, same sex couples began heading to local courthouses to get their marriage licenses.

Same-sex couples wasted no time getting to the St. Joseph County courthouse to make it official.

The ruling is a huge milestone for same sex couples in Indiana.

"I wanted to do it here I didn't want to have to go to Elkhart County or any of the surrounding counties to do it, so here we are, and we're going to be the first one I guess," said Schmokel.

It's also a new chapter in equality.

"The only change is if it's a male we'll change that on the license, female, female. The fees are $18 cash for residents and that's as long as one person is a resident of St. Joseph County we can issue a license," said Sue Steininger, Deputy Clerk of St. Joseph County.

Bovo and Schmokel were high school sweethearts. Wednesday's ruling brings relief because the couple has a 5-year-old daughter.

"We know that she's going to be taken care of and there's no battles between anybody fighting for anything from us and hopefully the end of discrimination," said Bovo.

The end of discrimination same sex couples say they have faced for too long.

The Indiana Attorney General has filed an emergency motion for a stay pending the outcome of an appeal.