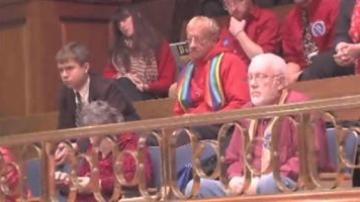 INDIANAPOLIS, Ind. -- On Monday, a 12-member group of Indiana legislators, who together make up the Senate Rules Committee, will hear testimony from people on both sides of the debate over the proposed amendment.

The way it's written right now, HJR-3 is a simple, one-line addition that defines marriage as between one man and one woman.

The house approved the modification late last month, but only after removing a second sentence that would have banned same-sex civil unions and other arrangements similar to marriage.

Last minute efforts have been made to lobby lawmakers prior to the public hearing.

"We want lawmakers to vote down the amendment," said Jennifer Wagner, spokeswoman for Freedom Indiana. "But, if not, keep it in its current format, pass it through the senate, return it to the house, and let's continue talking about other issues this session."

Groups in support of the bill, like Advance America and the Indiana Family Institute, urged their followers to get on the phone as well.

After hearing public testimony from both sides of the issue, the Senate Rules Committee is expected to take a vote.
Share this article: