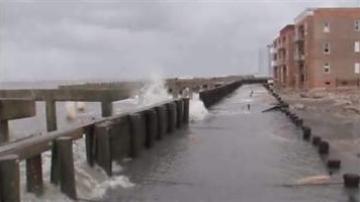 Chunks of it can be found blocks away.

In Ohio, video captures a river that overflowed causing  a dangerous amount of flooding.

The water in the Cuyahoga River was very deep and some people are having trouble driving and wading through it.

A lot of this overflowing is being caused by heavy rain from Sandy.

In Pennsylvania, some parts saw up to a foot of snow all thanks to Sandy.

Less than 50 miles from Pittsburgh, a Halloween winter wonderland was created. People had to shovel snow and many of them lost power.

Road crews were concerned the weight of the snow would lead to even more trees crashing down onto utility lines.