Santorum out of Presidential Race 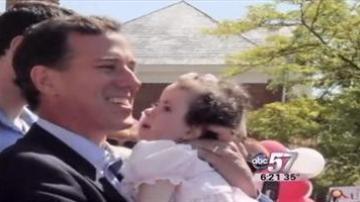 GETTYSBURG, Pa. -- Rick Santorum dropped out of the Republican Presidential Race on Tuesday.

The announcement came one day after his daughter was released from the hospital.

She suffers from a rare, and often deadly, genetic disorder.

Santorum won 10 primary election, but he was out spent in key states like Michigan, Ohio, and Wisconsin.

Santorum made the decision Monday night and took many advisors by surprise.

"Miracle after miracle, this was race as improbable as any race you will ever see for president," said Santorum. "While this Presidential race for us is over.  We are not done fighting!"

With Santorum out, Mitt Romney basically locks up the nomination.