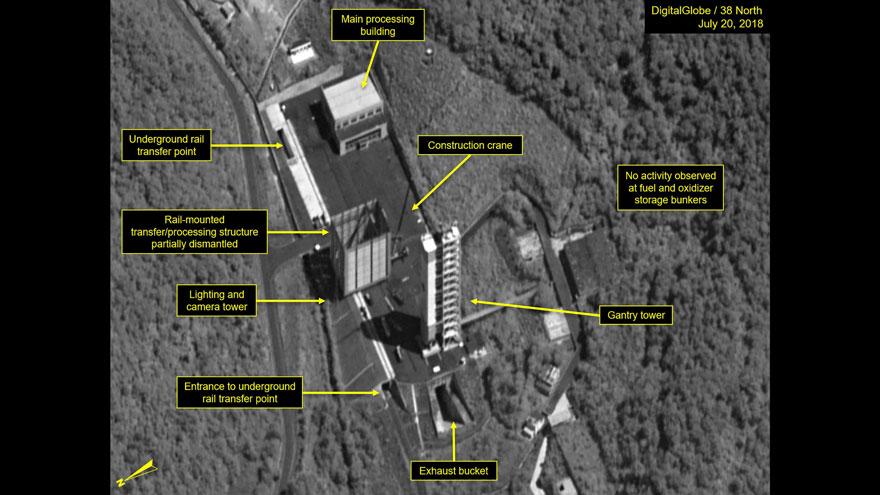 An analysis of the commercial satellite imagery captured between July 20 and July 22 shows that North Korea has started disassembling parts of its main satellite launch station -- a site that is believed to have played an important role in the development of Pyongyang's intercontinental ballistic missile program.

"Since these facilities are believed to have played an important role in the development of technologies for the North's intercontinental ballistic missile program, these efforts represent a significant confidence-building measure on the part of North Korea," according to 38 North's Joseph Bermudez Jr.

"Most notably, these include the rail-mounted processing building -- where space launch vehicles are assembled before moving them to the launchpad -- and the nearby rocket engine test stand used to develop liquid-fuel engines for ballistic missiles and space launch vehicles."

Both Trump and his secretary of state, Mike Pompeo, have been urging patience since the President held a historic summit with Kim in Singapore last month but the President has privately expressed frustration over the perceived lack of progress in talks, a US official told CNN.

Trump pushed back against that suggestion Monday, tweeting that he is "very happy" with the progress with North Korea, noting a lack of rocket launches and nuclear tests in recent months.

Adam Mount, a senior fellow and director at the Federation of American Scientists, agreed that these steps "are encouraging and helpful for extending talks" but noted they "are not themselves a major material step toward disarmament or militarily significant restrictions."

"This is consistent with North Korea's public line, which is that its successful test program is now transitioning to mass production of nuclear and missile systems," he said.

"Dismantling test infrastructure, especially for space launch vehicles, does not change this calculation. It's also troubling that North Korea has apparently been allowed to dodge verification at both Punggye-ri and Sohae. That will have to be fixed for subsequent agreements," Mount added.

And while Monday's images may amount to a "confidence building measure" by the North Koreans, it appears that they expect the US to reciprocate if talks are to continue.

CNN reported on Monday that continued negotiations between the two sides hinge on Washington's willingness to make a "bold move" and agree to a peace treaty with Pyongyang, according to an official with close knowledge of North Korea's position on the matter.

If the US is unwilling to replace the armistice agreement that ended the Korean War with a permanent peace that would ensure the survival of Kim's regime, Pyongyang will likely not proceed further with denuclearization talks, the source said.

Meanwhile, US Democrats in Congress remain largely in the dark on the administration's plans with regards to a path forward with North Korea and skepticism over Kim's intentions.

Ranking member of the Senate Foreign Relations Committee Bob Menendez told CNN on Monday he hopes Pompeo can provide answers when he testifies on Capitol Hill this week.

"We all want diplomacy to succeed, so I am interested to hear more from Secretary Pompeo this Wednesday on his views on this development -- and if he considers this to be significant," the New Jersey Democrat said in reference to the images published Monday.

"The fact of the matter is that last year, on President Trump's watch, North Korea made significant advances in its ballistic missile technology, achieving what many experts agree is a nuclear-capable operational ICBM," Menendez added.

"I want to hear from the secretary how and if this action by North Korea is integrated into a cogent and coherent diplomatic framework that gets us to complete and verifiable dismantlement of North Korea's nuclear and missile programs," he told CNN.