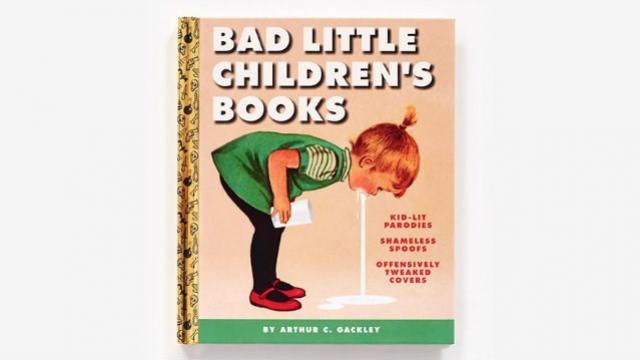 "Satire can be ugly," Abrams said in a statement on behalf of the author, writing under the pseudonym Arthur C. Gackley. "However, the book is clearly not being read by some in the way I had intended --- as satire --- and, more disturbingly, is being misread as the very act of hate and bigotry that the work was meant to expose, not promote. For this reason, I have asked ABRAMS to cease publishing the book."

Abrams did not respond to a CNN request to disclose the identity of the author.

"Bad Little Children's Books" is a collection of mock children's book covers that parody hot-button topics like racism and discrimination.

At the center of the controversy is the debate on whether the images portrayed in the book are satire or bigotry? One of the book's online critics called it "disgusting and utterly racist."

One cover titled "Happy Burkaday Timmy!" portrays a girl in a veil holding a ticking present, while another illustrates the "Rockets and Missiles of the Islamic State." A different cover paints a Native American family with the title "The Anti-Vaccine Kid and the Gift of the Navajo Blanket Riddled With Smallpox."

Illustrations in the book tackle not only race, but also macabre depictions of death or injury and lewd sexual themes, among others. CNN received a copy of the book directly from Abrams Books.

The book's cover features a yellow strip along the joint made to resemble the gold spine of the classic Little Golden Books -- except instead of cute animals and flowers, it has skulls, guns, bombs and knives.

On the front, the book says it contains parodies, spoofs and "offensively tweaked covers."

Though it was released in September, the book was thrust into the limelight Friday after the book-related news blog Book Riot excoriated the tittle for its "racist, xenophobic and religious bigotry" themes.

"There comes a point when 'funny' becomes straight-up hate and when that hate is straight-up racist," wrote former librarian, author and blogger Kelly Jensen. "This 'humor' adds to the misinformation, adds to the hatred, and ultimately, makes living in this society more frustrating, difficult, and dangerous for so many. And this 'humor' is the kind of garbage that needs to be eliminated at all levels, particularly in publishing," she wrote.

After a Twitterstorm calling for Abrams Books to recall the tittle, the publisher issued a statement Saturday standing by "Bad Little Children's Books." But come Sunday, Abrams Books backpedaled. The publisher defended the book's publication but said it would respect the author's request and suspend future publications.

"Some reviewers and commenters on social media have taken elements of the book at face value, which, we believe, misses the point of the book as a work of artistic parody and satire," read a company statement, released via Twitter. "Its intention is to shine a spotlight on stereotypes about race, gender, and difference that have become commonplace in today's world and to, in fact, skewer all levels of societal bias."

A spokesman for the Council on American-Islamic Relations, Ibrahim Hooper, called that statement a "wild" claim.

"It is probably wild that they claim it is to expose intolerance and bigotry," Hooper said. "I think it had the opposite effect of promoting it and exploiting it. Bottom line is they have the right to publish this kind of material, but should they? And I think given the divisions we have seen in our society I don't think it is the best use of the First Amendment."

Freedom of speech and responsibility are not mutually exclusive, argued Hooper. He called for tolerance and mutual understanding instead of the "promotion of hatred and division."

In a public letter, the National Coalition Against Censorship came to Abrams' defense, asserting "free expression and intellectual freedom."

"We urge the company not to accede to pressure to withdraw the book, but to stand for the proposition that it is the right of authors to write as they choose and of individuals to decide for themselves what to read. After all, anyone who doesn't like the book doesn't have to buy it," the NCAC said in its letter.

Abrams President Michael Jacobs sits on the Board of Directors of NCAC.

A 'fine line' of satire

Satire and bigotry are not mutually exclusive, said Jason Steed, a Texas Supreme Court and appellate attorney and former English professor. He has written about the role humor plays in identity, most recently during the US election.

"We use humor socially to figure out who we fit in with and what groups we are excluded from," Steed told CNN.

Satire however, can get complicated, warns Steed.

"The humor may not mean to be racist but to mock racism, and that may be some of what they (Abrams) are trying to get at. You push it to some kind of extreme," he said.

But "there may be a fine line with trying to make a point with satire and really hurting a lot of people. Everyone needs to figure out where the line is and decide what it means to be responsible.