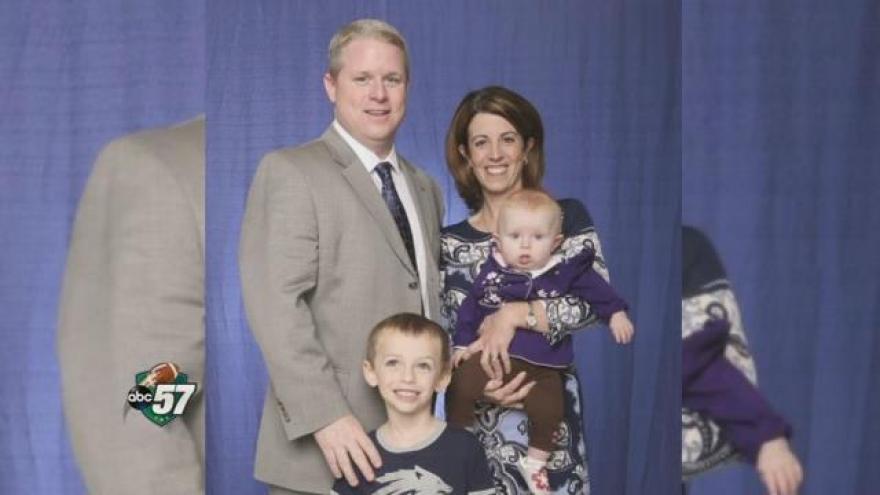 Saturday's game is a homecoming of sorts for Nevada Head Coach Brian Polian. Polian was an assistant at Notre Dame under Charlie Weis from 2005 to 2009 and coached special teams. He became known for his recruiting because he is such a nice guy.

Polian says South Bend will always hold a special place in his heart and it goes well beyond the time he spent on the sidelines.

"The Grotto. And I will find my way there, very quietly and in civilian clothes so nobody notices," said Coach Polian.

Polian spent countless hours at the Grotto when he was an assistant coach at Notre Dame praying, not for wins, but for a family.

"When you think about going to the Grotto to light a candle in hopes that you can start a family some day and it happens and your son is christened in the Log Chapel, I mean how can you not have fond memories?" Polian said.

South Bend is where Polian and his wife Laura started their family, welcoming their son Aidan into the world.

The Polians had been trying to conceive a child, but they were having trouble. After a few years, they decided they wanted to try adoption but that took time as well.

So the Polians went to then-Team Chaplain Father Paul Doyle and asked for help.

"After we prayed briefly, I said 'Well we should feel good about the outcome of this prayer.' I said amazingly the Lord's been tremendous to me lately in things I've asked. He's come through, so I feel especially blessed lately and I think this will be one more," said Father Doyle.

Just four days later, they found out they had been selected to become parents.

His name was a tribute.

The choice to adopt has become the greatest decision of their lives.

"It makes you appreciate this gift that she (birth mother) gave us. I look at him and love him so much and realize that because of her brave act and her selflessness, we're able to be parents, which is amazing," said Laura Polian.

The Polians certainly got their story book ending, but it wasn't over yet.

On July 24th, 2012 Charlotte Eileen Polian was born and just like that Aidan became a big brother.

"We are a very complete and very happy family and the two siblings get along wonderfully and we're blessed, I'm blessed to come home to that every night," Polian said.

Polian says there is just one thing that will make his story book ending complete.

"I have no problem saying that this is a special place, I'm the opponent and we're trying to win the game, trust me. I had one person ask me if I'm conflicted, no I'm not conflicted, I'm here to try and win," Polian said.