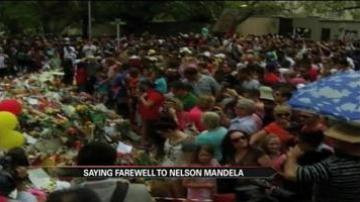 The week-long farewell to Nelson Mandela is underway in South Africa.

They were joined by former President George W. Bush and his wife Laura and former Secretary of State Hillary Clinton.

Nearly 100 world leaders including Pope Francis will join 90,000 South Africans to pay their respects to the man who healed a nation and changed history.