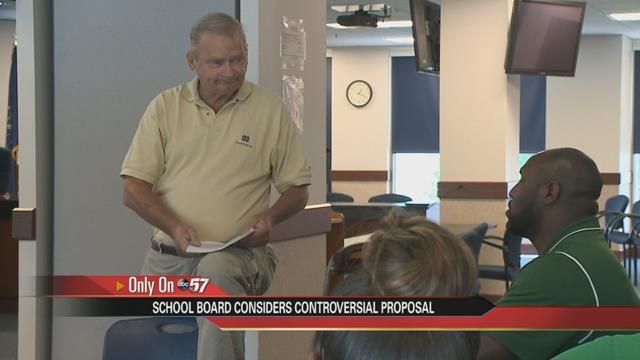 “I thought it was degrading to this corporation,” said Bill Sniadecki, South Bend Community School Corporation board of trustees member.

The drama continues for the SBCSC over a controversial proposal to lower academic standards for student athletes.

Monday, South Bend’s Common Council is set to vote on a resolution condemning this change.

Ahead of that meeting, there was an informal one between school officials.

Sniadecki was there along with the committee that drafted the original proposal.

He thinks the athletic committee is starting to understand his frustrations with the initial proposal.

Sniadecki is still planning to address the Common Council and present a new proposal with updated language, he thinks, is less insulting to this community.

It was certainly a heated discussion at the SBCSC building Monday afternoon.

“Before they looked at it they were against it, but after they read it and seen it, it kind of mirrored what they were trying to do,” said Sniadecki.

Sniadecki is upset because of the proposal to lower the GPA requirements for student athletes.

So he presented an amendment to the committee, he says, would help stop the negative attention the district’s been attracting.

“They all called me and it’s overwhelmingly, the community doesn’t want to lower the standards,” he said.

Sniadecki proposal fell in line with the original plan the district drafted in 2009.

“Keeping our 2.0 but still keeping the kids in there,” he said.

Instead of removing athletes who fall below 2.0, those students would have to attend mandatory study sessions and bring their grades up, passing 70 percent of their classes.

“Still have IHSSA standards to continue to play, plus improving their GPA until they reach that 2.0,” Sniadecki said.

“I don’t think 2.0 affected our enrollment at all,” he said.