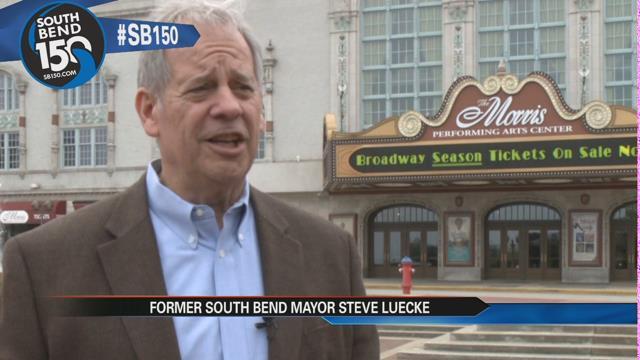 SOUTH BEND, Ind. -- In advance of the South Bend 150 celebration, ABC57's Colleen Bormann sat down with men who helped shape South Bend into the city it is today.

The Morris Performing Arts Center is bursting with history.

"Buildings like this were built to give people a sense of history and the broader world,” said former South Bend Mayor Steve Luecke.

“They dug through the original paint to see what had been original colors,” said Luecke.

The historic landmark and anchor in downtown South Bend underwent a major renovation in 2000.

“As we got into it, as the committee made recommendations, we looked to see that there was an opportunity to remove the back end, put new stage on, and that would allow us to accommodate Broadway shows,” said Luecke.

On the lower level in the hallway is Luecke's photo.

Whether it was his sense of humor or his passion for the city and economic development, Luecke was the longest running mayor in South Bend. He served five terms.

During his tenure, Luecke focused a lot of his time on the youth of South Bend and improving schools.

Luecke had some tough decisions to make, including what to do with the old, abandoned Studebaker buildings.

"We made the hard decision to take them down for new use and were able to put together with TIF money, got assistance from federal government. The vision was for new jobs and a new economy,” said Luecke.

That vision became a reality with both Innovation Park and Ignition Park.

“To have been able to clear some of these buildings that have become a blight on the landscape, to make way for new companies in the new economy, new technology, the GE turbine research facility, data realty as our first tenant in Ignition Park,” said Luecke.

Luecke is also credited with creating a strong relationship between the city of South Bend and Notre Dame.

"So we worked with the university and the city to encourage them to build Innovation Park where professors can come off campus and carry out research. But then decided that Ignition Park can be that landing spot,” said Luecke.

A landing spot that encourages high-tech manufacturing and higher-paying jobs.

What are his hopes for the future of South Bend?

Another major achievement for Mayor Luecke was the designation of South Bend as an All America City.