SBCSC President calls on school board to remove Sniadecki's title 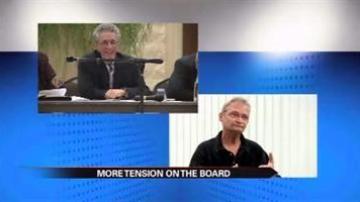 SOUTH BEND, Ind. -- As the South Bend Community School Corporation board elections near, there was another round of blows between current school board President Roger Parent and school board Vice President Bill Sniadecki.

This time, it all centers around a 38-page document that calls for Sniadecki to have his title removed from the school board.

Among the documents, Parent described Sniadecki as unruly and bullish, but when Sniadecki addressed the accusations, he said the only bully on the school board is Parent.

"This needs to stop, stop now for the sake of our kids," said Sniadecki.

Since last month, Parent and Sniadecki have been at odds. It all started when Sniadecki voiced concerns during an executive session about the potential closure of three South Bend schools.

He said the discussion that happened behind closed doors was illegal. Later, Parent fired back and called for Sniadecki's resignation.

In a 38-page document, Parent wants Sniadecki removed from his position as vice president on the school board.

"I feel this is a total attack. It's unethical," said Sniadecki

In the documents, Parent said the resolution shows a pattern that Sniadecki violated school corporation bylaws, polices and state laws for years.

It goes on to describe how Sniadecki yelled at employees and made them fear for their safety. Wednesday, Sniadecki confronted the accusations head on saying they are simply not true. Sniadecki said the only one with a pattern of unethical behavior is Parent,

"His pattern is if you don't vote his way or want to do things his way then you are on the wrong side of the sheet."

And that's not the first time we have heard a board member make that type of comment. At Tuesday's candidate forum, Dustin Sanders, an at large school board candidate, called the relationships on the board toxic because of Parent's attitude.

"There are ways to conduct meetings. I know he stands up there and said he has been strong-fisted with other board members, but yet he does not follow the rules himself," said Sanders.

Sniadecki said that trying to remove him from his elected position as vice president of the school board is only a slap in the face to the community. He said this latest attack by Parent is only taking away from the real issues that the school corporation needs to be focusing on.

"Our focus should be on the kids, not trying to attack individual board members for political reasons," said Sniadecki.

Parent is calling a special meeting with trustees November 9 to review the documentation and vote on a resolution to censure board member Sniadecki.