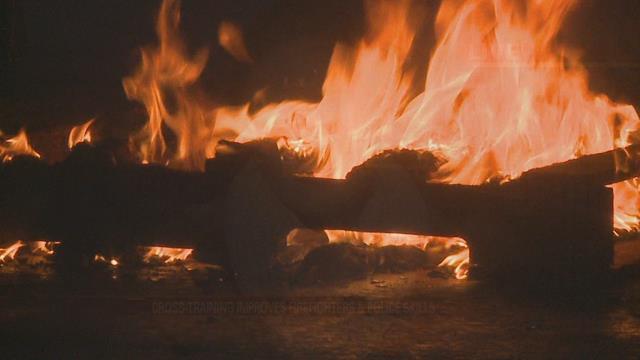 For the first time the South Bend Police and Fire Departments cross-trained in a Burn Patterns and Arson Investigation class. Firefighters and officers are first responders to fires and crime scenes, often times they have to work together so a class like this was necessary.

Both departments traded off knowledge on Tuesday afternoon to help each other be better prepared when future incidents happen.

“Our job is to go to a fire and put the fire out. We don’t think about anything after the fire,” Corthier added.

He said this class helped to shed light on the job that each department has to do.

“We realize that you have to protect evidence. This kind of puts things into a little different perspective where we maybe have to take a step back and realize maybe we shouldn’t be throwing so much water on the fire,” said Corthier.

The class created a real-life scenario for firefighters and crime scene technicians.

“We’re gonna open up lines of communication between the fire department and police department that way we can further educate each other different aspects of what we deal with,” said SBPD 1st Class Patrolman Ryan Hiipakka.

In 2014, there were more than 60 calls of reported arson and because of the class the departments will now know how to better work together on arson investigations.

“What we’re trying to recreate here is to have multiple pieces of evidence, different types of evidence that’s going to be within the scene,” added Hiipakka.

Often times when firefighters are fighting a fire, they do not know at the time that it is the setting of a crime scene. “It’s usually after the fact that we realize that ‘hey we were in a crime scene,’" added Corthier.

Therefore the class helped them know things to look for and strategies to use to protect evidence while still being able to put out a fire.

On the contrary, officers were able to learn how a fire burns and techniques firefighters use to put out fires.