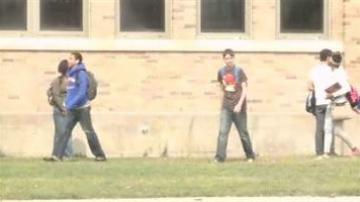 SOUTH BEND, Ind. -- South Bend Police and the South Bend Community School Corporation team up to bring a gang and violence prevention program into the classroom. This after a Washington High School student died and four South Bend teens were shot this past weekend.

Donna Dickerson knows how the younger generation feels when it comes to hurting someone that hurts you first, "They are hurt and they feel like they need to retaliate, but that's not the thing to do, I mean, if that's the case, I would be out there with a gun, I had a son that was murdered myself in 2004," she said.

Dickerson said the youth now a day have changed a lot since she was growing up. She lives across the street from Lincoln Primary Center, where her 9-year-old grandson goes to school. She is a substitute teacher with South Bend Community School Corporation and she is busy raising her grandson.

"I've had him for about a year, helping my daughter out a little bit," Dickerson said. She tells ABC 57 News her daughter has her hands full with raising four of her other children.

She says she knows today's youth don't respect at the level her generation did when they were in school. Dickerson welcomes a new program that South Bend Police will soon be implementing into the middle schools that will help teach children how to truly respect themselves and others.

The program is called (G.R.E.A.T.) Gang Resistance Education And Training and is built around school-based, law enforcement officer- instructed classroom curricula. The program's website (www.great-online.org) states the program is intended as an immunization against delinquency, youth violence, and gang membership for children in the years immediately before the prime ages for introduction into gangs and delinquent behavior.

The program will be taught by the SROs that are stationed at the middle schools throughout the South Bend Community School Corporation.

"That also gives a kid or student a chance to build a nice rapport with that SRO at the school because they see that SRO on a continuing basis," said Crittendon.

With so many kids today turning to gun or gang violence when they are upset with someone, Donna Dickerson, a grandma, teacher, and now Mom again, says anything the community does to get kids to slow down and think before they react is a positive.

"I think of him growing up (Grandson) and you know, and I'm just hoping and praying that I don't have to live it again (another family member murdered)."

Lt. Crittendon said all the SROs will go through training in December and funding for the training is provided by the Department of Justice. The program will be implemented at the student level next semester.

If the program is will received by middle school students throughout the school corporation Lt. Contending said it will likely be implemented in the elementary schools and high schools.