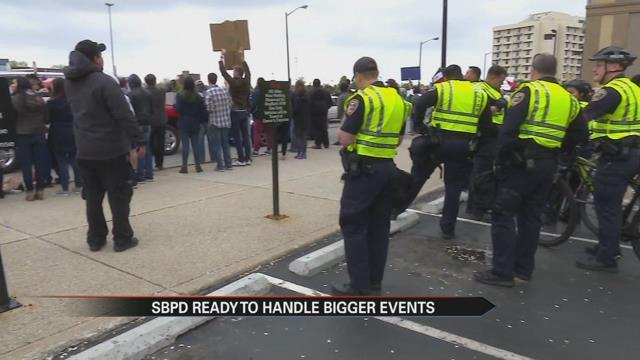 “I’ve been around here for 26 years and I’ve never been more proud of the police department than i was Monday,” said Jeff Rynearson, SBPD Division Chief.

“We weren’t entirely sure what to expect,” said Rynearson. “We wanted to plan for the worst and hope for the best.”

Rynearson looked back on what could’ve been another Costa Mesa, California situation.

“We looked at what can be my worst case scenario and planned accordingly,” said Rynearson.

But Monday was a very different scenario.

There were still quite a few large crowds, but no major incidents.

“How the police handles those situations, can really dictate whether or not it stays a positive environment and a protected environment or sometimes it can escalate to the next level,” he said.

SBPD deployed 50 officers to handle the situation, and an estimated $30,000 in overtime pay, the department says was well worth it.

But police had experience with controlling large crowds.

And for a few years, several thousand participated in the annual Bike the Bend event.

Monday, though, was different.

But after handling a potentially bad situation with ease, morale is high for the city’s next challenge.