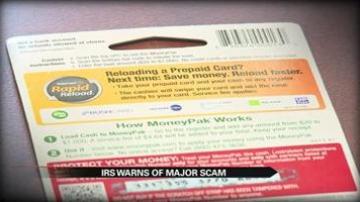 SOUTH BEND, Ind. -- Scammers posing as IRS agents on the phone are tricking even the smartest people into giving out personal information. The IRS wants taxpayers to know the IRS will never call or email you to demand money or to threaten to throw you in jail.

The phone scammers are spoofing their number to make it appear as though the IRS is calling.

The IRS says the scammers have hit Michiana pretty hard.

"We're very concerned about it. The IRS Inspector General determined it to be the biggest scam ever," said Luis Garcia of the IRS.

Tens of thousands of people have been scammed out of more than a million dollars so the IRS wants to warn you not to fall for it.

"What these guys do- is they'll call you up. They'll present themselves as IRS agents and then they'll ask for immediate payment of whatever amount they'll determine," said Garcia.

They'll want you to put the cash on a Green Dot money pack card.

Jensen says after that happens, there's nothing you can do. Your money is gone.

She's talked with the victims firsthand-but says the phone isn't the only way they get a hold of you.

"The emails. Delete them immediately because you stand a very, very strong chance of getting a virus," said Jensen.

In both situations, the criminal poses as an IRS agent asking for either money or to confirm a Social Security number.

If you get a call or email from someone claiming to be a representative from the IRS, look up their number independently and call them back.

They can confirm or deny if a rep contacted you.

If you've already fallen victim and want to report the scam, contact the Treasury Inspector General for Tax Administration.