Scavenger hunt does good with crazy random acts of kindness 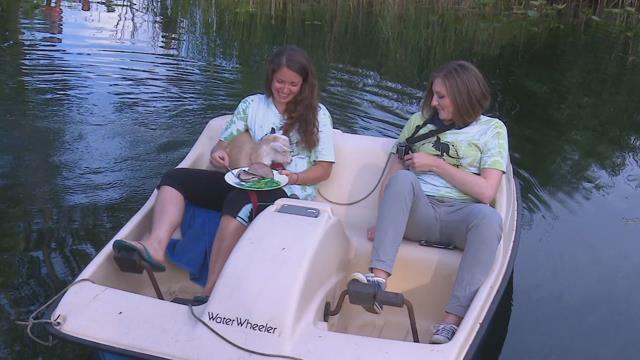 A goat on a boat eating green eggs and ham. It’s all for a good cause--the Greatest International Scavenger Hunt the World Has Ever Seen.

Most people refer to it as g.i.s.h.w.h.e.s., prounounced gish-whiz. Basically, people from all over the world take one week a year to do crazy things and inspire people to commit random acts of kindness.

A boat with a goat is just one of the ridiculous things team Second Breakfast has to do for the GISHWHES scavenger hunt. There’s a list of 173.

“It’s just to be goofy and get yourself out there, make people smile, make people laugh. It’s to have fun,” said g.i.s.h.w.h.e.s. participant Amy Yeske.

But it’s also the single largest contributor to the non-profit Random Acts, whose mission is to ‘conquer the world one random act of kindness at a time.’ g.i.s.h.w.h.e.s. has pledged over 93,000 random acts, breaking the world record.

“They actually fundraise, and then people can apply for some of that money for projects they’re doing in their own community,” said team captain Erin Miller.

Misha Collins from the TV show Supernatural started it back in 2011. Now, people from more than 100 countries participate every year.

Some of the other crazy things team Second Breakfast has done including showing that a man can be an island.

“Last year, we made it into the book they created. I think it was no man is an island, and we had to prove it wrong,” said Amy.

So, Erin made her face into an island, and it was featured in the coffee table book.

This year, Amy’s already had a constellation drawn on her back using her freckles, and the list keeps going.

Erin and Amy say there’s more to the scavenger hunt than just fun. It’s doing good in their communities.

“I think people need to smile more. They need to laugh more and stop focusing on all the craziness that’s going on in the world,” said Amy.

“There’s so much negative in the world right now that I think one of the reasons GISH-WHIZ is so awesome is because we’re bringing people together from all over the place, doing stuff in our own communities, and the happy positive effect is just supposed to spread everywhere,” said Erin.

Team Second Breakfast has until August 6th to check off as many acts from the list as possible. The scavenger hunt started June 30th.

The team who racks up the most points wins a trip to Iceland with Misha Collins.