School board member accused of bullying 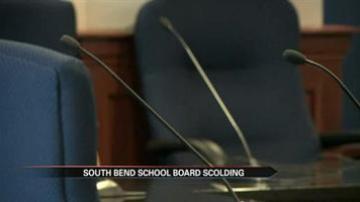 SOUTH BEND, Ind.--The school board is supposed to protect kids from bullying, but now one member is being accused of being the bully. His colleagues say Bill Sniadecki bullied the South Bend Community School Corporation’s superintendent at the October 21st school board meeting. In response, they sent Mr. Sniadecki a letter of reprimand.

The private letter, released to the media by Mr. Sniadecki, says his actions were inappropriate for a board member, specifically his comments to Superintendent Dr. Carol Schmidt.

The letter states “regrettably you went so far as to call Dr. Schmidt mean and evil. You told her to go back to Arizona.”

“They don’t like me because I tell it the way it is and I let people know,” said Snaidecki.

His so called “telling it like it is” landed him with a censure last November. This reprimand isn’t as serious, since it was written and signed by only three board members, but it’s another slap on the wrist for Sniadecki .

So why does he deal with all the drama and not just step down?

“Oh every day I ask why I put myself through that but then I think about the kids, the people. And in past years it’s more political than it’s ever been,” said Sniadecki.

Parents say they’re picking up on the politics as well.

“I follow it because I have an 11-year-old daughter in school so I would like to pay attention and figure out what she’s learning and what’s going on with her at school,” said Rodrelle Jennings, father of South Bend student.

“A lot of times the issues seem to be with adults, whether they’re the board or what’s going on with staff or whatever and that’s disheartening sometimes,” said Becky Zakowski, mother of South Bend student

Thankfully, mom Becky Zakowski believes the political hoopla stays out of the classroom.

“I think they have a very, very hard job to do to make everybody happy and like I said his experience at school to date- I’ve been very pleasantly surprised,” said Zakowski.

Board president Michelle Engel did return our phone calls. She said she stands by the letter and says bullying isn’t tolerated with kids or adults.