School corporations second in command without an Indiana license 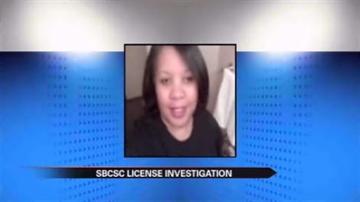 SOUTH BEND, Ind. -- The South Bend School Board is investigating a claim that another administrator is working without a valid license. The corporation’s second in command, Ericka Harris, may not be properly certified.

Last week we brought to the corporation's attention Doctor Carol Schmidt was working the past 2 years without a superintendent’s license. She quickly applied for the license after our call.

There's some debate whether someone in Harris’ position actually needs a license at all.

But the school board did issue a statement letting us know they've initiated an internal investigation on this matter.

The position in question is that of Chief Officer of Education and Innovation Services, a job that is new.

Some board members say the woman who holds this position, Ericka Harris, is considered to be the superintendent’s second in command.

One board member is adamant when someone is in a certified position of authority and makes that much money in this district, they should hold an administrative license-

We did some checking and found that Harris just applied to have her Michigan K-8 elementary teaching license renewed on the 3rd of June a few days after we exposed that the superintendent was without a license.

According to the Communications Director at South Bend Community School Corporation, Harris holds a master’s degree and also has the qualifications to serve as an administrator in Michigan.

However a check in the Indiana Department of Education records show that Harris does not hold any type of education license in the state of Indiana.

The director of communications wrote in a statement late Thursday afternoon that Harris has been in contact with the Indiana Department of Education and they are processing her Indiana Administrator’s License.

A quick check online with the Indiana Department of Education shows what licenses are required for people who hold positions in education within the state of Indiana and the position that Harris holds is not listed at all.

We contacted several board members, but they said it would be inappropriate to talk about this right now because of the pending human resources investigation.

The statement they released went on to say if a violation of policies or procedures has occurred then there would be appropriate consequences.

This is the full statement from the school corporation.

Ericka Harris was hired as the Chief Officer of Education and Innovation by the South Bend Community School Corporation in July 2012.  Ms. Harris has a valid Michigan K-8 professional education certificate.  She also has the qualifications to serve as an administrator in Michigan including a Master’s Degree.  Ms. Harris has been in contact with the Indiana Department of Education and they are processing her Indiana administrators’ license.