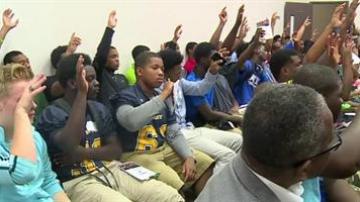 Every black male high school student in the district got an initiation to eh program.

"I'm believing that they're loving it. It's a chance for us to get out of school and to interact with people who are in the community trying to work with us," said Blu.

Dr. Moss spent the past year planning the inaugural summit.

It was held at the Faith Apostolic Praise and Worship Center.

"The reality is- if we don't engage these young men academically now, they will look for security, they will look for community elsewhere. And that's why we have gangs. So if we can create an environment now where these guys feel connected and engaged with each other then we can see our gang activity reduced," said Dr. Moss.

Mentor Lieutenant Eric Crittendon has been a police officer for 24 years.

"This event is amazing and it's much needed and I hope there will be another one after this one but it's a way to get the message out here that you got older black males that care about young black men that are out there and try to give them some focus in their lives," said Crittendon.

"There's just a lot of people that don't have male figures in their life to keep them on the right path so they go to the streets instead. Nobody's there to help them out," said Neeley.

You may be wondering why this was only offered to the black males in the school district and not any of the white males.

Dr Moss and says it is because there is a huge achievement gap. Black males score at the bottom of all the academic performance categories so he's trying to bridge that gap by focusing on the black males in the district.