Schools aren't fans of heat wave, some still without AC 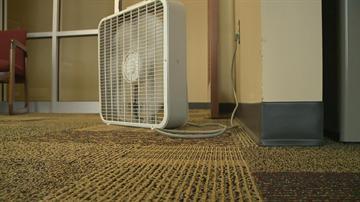 Students and faculty at Indiana University South Bend are sweating it out since the school hasn’t switch over to air conditioning. Some offices and classrooms are reaching 80 and 90 degrees.

"They opened the doors and let the breeze come through, but it was still really hot," said IUSB Sophomore Summer Benjamin.

The school said the weather is just too unpredictable to make the change from heating to cooling.

"They just can't turn them on and off like you can at home," said University Spokesperson Ken Baierl.

He said it takes five days just to start the air conditioning process.

"To switch over to cooling we need to wash and clean our chillers, that takes about five days," said Baierl.

As temps are expected to fall, the fear is that winter could have another go at it.

"If the temperature drops below freezing at night which it may do here in the near future that could damage our cooling equipment," said Baierl.

This could lead to pipes busting and even flooding inside the buildings. That would come with quite the price tag.

"It'd be thousands, tens of thousands, it's just a risk that we can't take, so we're trying to make sure we do everything else that we can to keep people as comfortable as we can," said Baierl.

The school has fans plugged in, and is leaving the doors open to circulate air. Some teachers are taking their classes outside, and even giving out assignments online.

IUSB said this is the first time it’s ever had to deal with this problem.

"This has never happened before," said Baierl. "Historically we get our air conditioning up and running in early May."

And that’s still the plan this year.

"We're looking at early May as we do each year to make the transition over to cooling. I don't know if we're expecting another heat wave that might change our opinions," said Baierl.

Ivy Tech in South Bend said it also hasn’t made the switch with the fear that colder temps are still a head.

Saint Mary’s College said since temperatures were on the rise last week, it turned on the air conditioning then. SMC spokesperson said the change came six weeks earlier than normal.

University of Notre Dame said it started making the transition to AC on March 12th. The process normally takes a couple weeks, but with the unusual temperatures this March the university switched from heating within three days.

Tempertures in the area are expected to fall as soon as Friday, but they will still remain high for March.