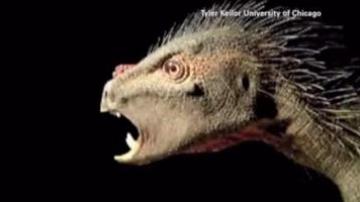 CHICAGO -- A University of Chicago scientist discovered a new dinosaur.

Paul Serano said the Pegomastax Africanus would have looked something like a two-legged porcupine. He also says the animal was less than two feet long and weight something less than a house cat.

While Serano is the first to describe the species, it was actually excavated in the 1960s.

Scientists said the dinosaur lived about 200 million years ago.