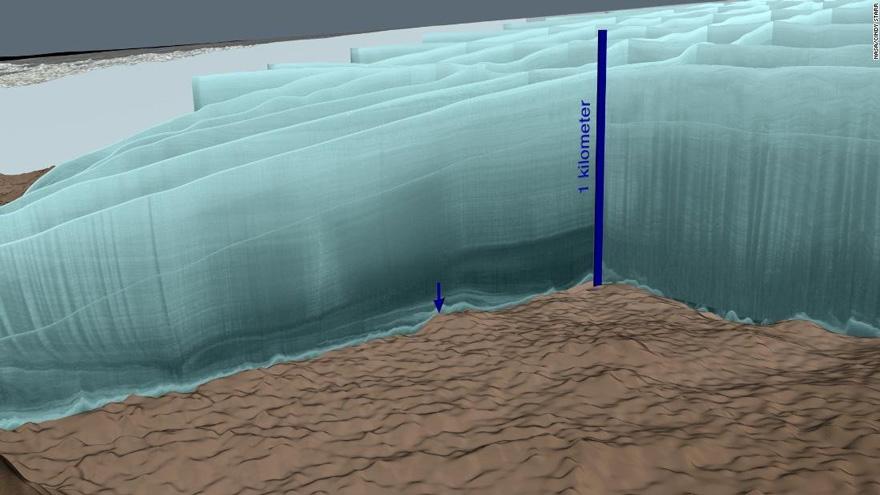 CNN) -- A team of international researchers has verified the discovery of the first meteorite impact crater ever found deep beneath the Greenland ice sheet.

Found under the Hiawatha Glacier, the crater is about 1,000 feet (300 meters) deep and 19 miles (31 kilometers) wide, according to NASA's Goddard Space Flight Center.

It was likely formed when a half a mile (800 meter) wide iron meteorite struck northwest Greenland less than three million years ago. It was then covered in ice, hiding it from view, NASA said.

A team of researchers from the University of Copenhagen's Centre for GeoGenetics at the Natural History Museum of Denmark first spotted the crater in July 2015.

The researchers were inspecting a new map of the topography beneath Greenland's ice sheet created by ice-penetrating radar data when they noticed a circular depression under the Hiawatha Glacier.

They suspected it was a crater and have spent the last three years examining NASA data and working with colleagues in the United States to verify their findings, which were published in the journal Science Advances Wednesday.

"The crater is exceptionally well-preserved and that is surprising because glacier ice is an incredibly efficient erosive agent that would have quickly removed traces of the impact," said Kurt Kjær, a professor at the Center for GeoGenetics at the Natural History Museum of Denmark and lead author of the study.

Kjær said the impact might have occurred at the end of the last ice age, which would make it among the youngest on the planet.

The research team plans to continue investigating how the meteor's impact affected the planet as a whole, NASA said.