Scientists excited to spot a huge spider eating an opossum 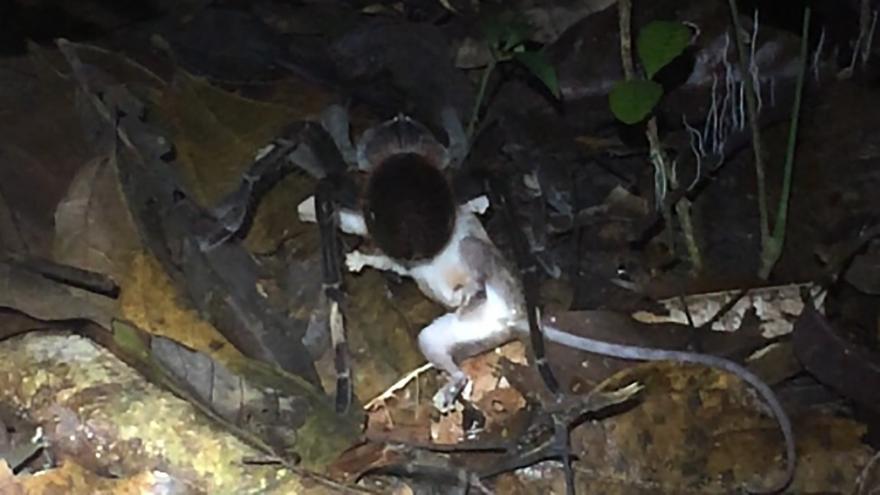 (CNN) -- It was almost midnight in the Peruvian Amazon when scientists from the University of Michigan heard a scratching noise in the leaves and saw a dinner plate-sized tarantula dragging a opossum along the forest floor.

The spider had grabbed the opossum -- a small furry creature known as a mouse opossum -- by the neck and it was still twitching when the scientists found the pair. They watched for about five minutes and were able to document the moment on video, before the spider hauled its prey behind a tree root to enjoy its meal in peace.

The 2016 encounter was detailed in an article published in February 28 issue of the peer-reviewed journal Amphibian & Reptile Conservation.

The article titled "Ecological interactions between arthropods and small vertebrates in a lowland Amazon rainforest" documents 15 cases of arthropods -- mainly large spiders and centipedes -- preying on vertebrates like small frogs, snakes and lizards.

"These are not common events to observe, period. Any kind of predation event involving a vertebrate, whether it's a snake eating a frog or a bird eating a lizard -- all of these are very rare," said Dan Rabosky, a professor of ecology and evolutionary biology at the University of Michigan.

He brings a group of researchers to the lowland Amazon rainforest in a remote part of southeastern Peru once or twice a year.

"Our research is mainly focused on trying to understand why there are so many species in the tropics," Rabosky said. "It's a puzzle that's fascinated biologists for a long time."

His teams are on the lookout for snakes, frogs and lizards during their nighttime walks, but they often see large spiders on the prowl.

"They're large active predators and so they're out hunting all the time," Rabosky said. "We'll frequently find them preying on large crickets and grasshoppers."

He said that biologists have probably underestimated how many small vertebrates are killed by large spiders and centipedes.

"We really don't know anything about the ecology of a lot of these animals. It just highlights how little we know," he said.

The paper also documents spiders and a giant water bug killing various frogs and lizards and a particularly terrifying case of a large centipede decapitating and partially eating a venomous coral snake.

The spider that killed the opossum had a body that's bigger than a baseball, and that doesn't count the legs. The opossum was about the size of a softball.

They talked to mammalogists, who said it appeared to be the first documented case of a spider eating an opossum.

'We were pretty ecstatic and shocked'

"We were pretty ecstatic and shocked, and we couldn't really believe what we were seeing," doctoral student Michael Grundler said in a statement. "We knew we were witnessing something pretty special, but we weren't aware that it was the first observation until after the fact."

Grundler was one of the students who saw the encounter and his sister Maggie Grundler captured the video on her phone. They are both co-authors of the paper.

It all may seem like nightmare fuel -- especially when you're in the Amazon in the dark, but Rabosky said that's not the case.

"For our group it's actually the most amazing thing. Everyone is very excited about this sort of stuff," he said.