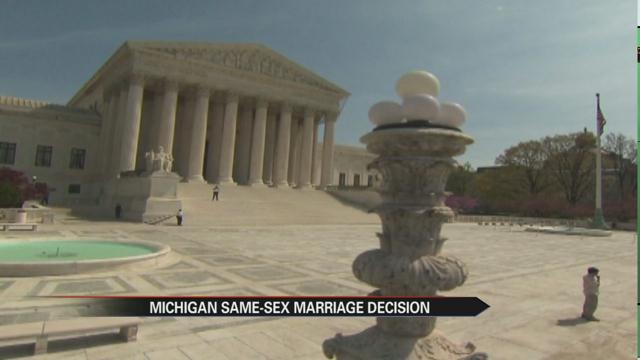 Tuesday, the U.S. Supreme Court will hear arguments on same-sex marriages for four states including Michigan.

Many experts say the court's pending decision on this case could make gay marriage legal across the country.

That hearing is expected to be longer than usual, according to University of Michigan professor Richard Friedman.

Nationally, the growing advocacy by the LGBT community led to over 30 states supporting same-sex marriage laws.

“Because all the U.S. Courts of Appeal had held in favor, the Supreme Court said there's nothing really for us to decide," said Friedman. "They don't like jumping in unless there's a conflict.”

Michigan, Tennessee, Ohio and Kentucky had gay marriage bans upheld by the 6th circuit court of appeals back in November.

This caused conflict in the lower courts leading the SCOTUS to take on the case.

“The US Court of Appeals of the 6th Circuit said there is no right, other courts of appeals said that there is," said Friedman. "The Supreme Court doing its job does not like, on particular issues, to allow to be that your constitutional rights are dependent on what part of the country you're in.”

Both sides of the argument will meet in the nation's capitol to discuss two questions:
And Friedman thinks the odds are, the court's late summer ruling would be in favor of gay marriage with a 5-4 vote.

“The vote that is most in play is Justice Kennedy's because Justice Kennedy is a firm believer in federalism and federal rights of the states to make their own decisions and marriage is a traditional area of state control," he said. "On the other hand there have been 3 significant cases involving gay rights in which Justice Kennedy has written and opinion on the assertion of the right, most recently in the United States v. Windsor a couple years ago in which the court held 5-4”

Members of the LGBT community are hopeful that a ruling will be reached soon.

The decision is expected to be made late summer.

A decision that will have many of residents anxiously waiting.

“There's a degree of optimism just based on developments that have happened in the last year, other court decisions," said Michael Lane, board member of GLBT Resource Center of Michiana. "I don't want to get overconfident but cautiously optimistic.”

For more information on the LGBT community in Michiana, click here.