Search ends for 3 Marines missing after aircraft 'mishap' off Australia 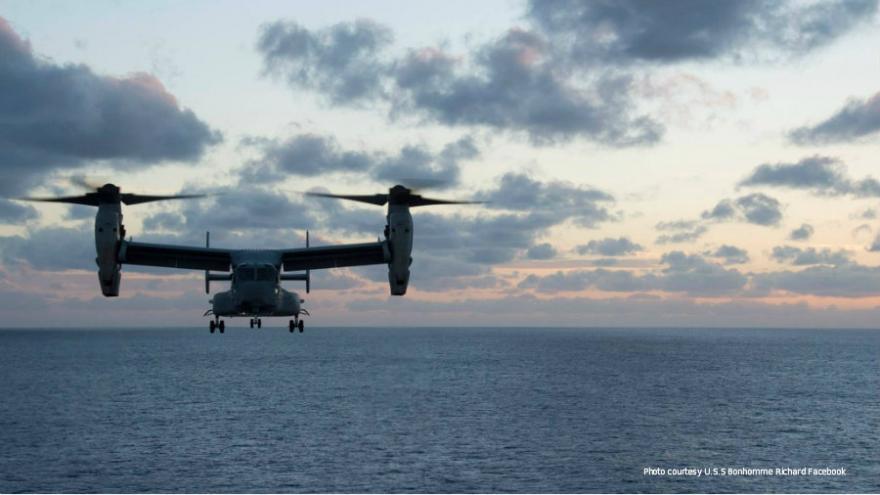 (CNN) -- A sea search off Australia's east coast for three missing Marines was called off early Sunday, a US military official told CNN.

The three Marines have been missing since what the Marines Corps calls a "mishap" with an MV-22 aircraft on Saurday.

Twenty-three of the 26 personnel on board the aircraft were rescued, the US Marine Corps said.

US military aircraft and boats scoured ocean waters off Australia searching without success for the three missing Marines.

The families of the missing Marines have been notified, the military said.

A salvage operation to retrieve the aircraft will begin in the next several days.

The US military has been in the area for training exercises with the Australian military. The MV-22 is a vertical-launch aircraft, also known as an Osprey.

"The aircraft involved in the mishap had launched from the USS Bonhomme Richard (a Navy amphibious assault ship) and was conducting regularly scheduled operations when the aircraft entered the water," the Marine Corps said in a statement.

Crew on board the Bonhomme Richard were performing water training exercises Saturday, according to the ship's Facebook page. The exercises were a followup to joint military training between US and Australian forces that wrapped up last week.

Australian Prime Minister Malcolm Turnbull has also been made aware of the operation in Shoalwater Bay. Australian Defense Minister Marise Payne said in a statement she had spoken to US Defense Secretary James Mattis to offer Australia's support in "any way that can be of assistance."

Australian authorities said no Australian personnel were on board.

The recent joint military exercise took place largely in Shoalwater Bay and involved more than 30,000 US and Australian personnel, according to Australian Defense Department.