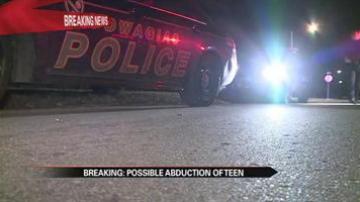 DOWAGIAC, Mich. -- Authorities are searching for a possible abducted child. It happened behind a dental office on the 500 block of Riverside Drive in Dowagiac, Michigan.

Police say they received word of the incident shortly after 7:15 p.m. Wednesday, when 3 kids playing in the dental office's parking lot claim they heard screaming coming from behind the building.

The children say they went to see what was going on when they witnessed a man taking a teenaged-girl into the woods behind the office against her will.

The kids also told police that the man looked to have a handgun.

The search team was out looking until 2:30 a.m. on Thursday.

K-9s and bloodhounds were used, but the police didn't find anything.

Authorities also issued a child is missing notice, although there's been no reports of any missing children in the area.