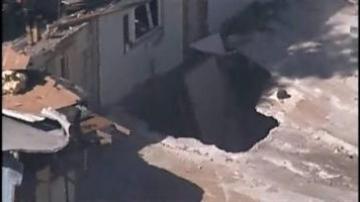 SEFFNER, Fla. — Investigators discovered another sinkhole a few miles away from one that swallowed a 37-year-old man while he was sleeping in his bedroom.

Police said the sinkhole is about 30 feet wide and a 100 feet deep. The hole could also extend underneath two neighboring homes.They are both less than 40 feet away.

"There is no one allowed in those homes and there'll be a determination made if they're condemned in the coming weeks," said Hillsborough County Spokesman William Puz.

Family members of the man swallowed by the sinkhole are frustrated. His remains are still buried in the rubble.

"They got this big equipment," said the victim's brother, Jeremy Bush. "Why can't somebody be harnessed up on that equipment to try to recover him."

Police said that a recovery effort is just too dangerous.