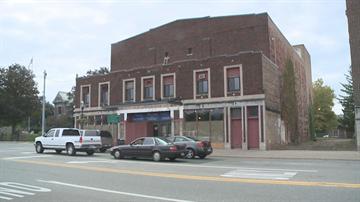 NILES, Mich. – What looks like a new marquee juts out from the, once proud, Ready Theater on Main Street in Downtown Niles. Paper covers the new windows across the front of the building shielding eyes from the work being done inside.

The theater sits along a busy section of Main Street which seems to be fueling speculation. “A lot of people think it’s going to be another theatre,” said Niles resident Scott Kline.

“I hope it’s going to be a theatre again, I really do,” said another resident Tabitha Russell.

The Ready Theater has been a staple in Niles for generations. The building was erected in 1929 as a single-room stage and theater. The building closed in 1981 because business was bad.

Moore bought the building from its owner, a Detroit-based theater company, and turned the building into three movie separate movie theaters. The building reopened in 1983 as Ready 3 Theater. A fourth screen was added (Ready 4 Theater) before the building closed its doors in January of 2005.

According to the City of Niles, Moore currently has a building permit for new bathrooms. Tuesday an electrician’s truck was parked in the back of the building.

“The seats are gone from all four theaters,” said Ron Sather president of the Four Flags Chamber of Commerce. Sather said he toured the building with Moore in 2011. “(She) has converted it back to its original style,” he said. “One theater, a balcony (and) a stage.

The possibility that the Ready Theater reverts back to a performing arts center has hopes up. “The Ready is a big part of Niles’ history,” said Kline.

Moore also owns Wonderland Cinema in Niles along with two other theaters in Kalamazoo.