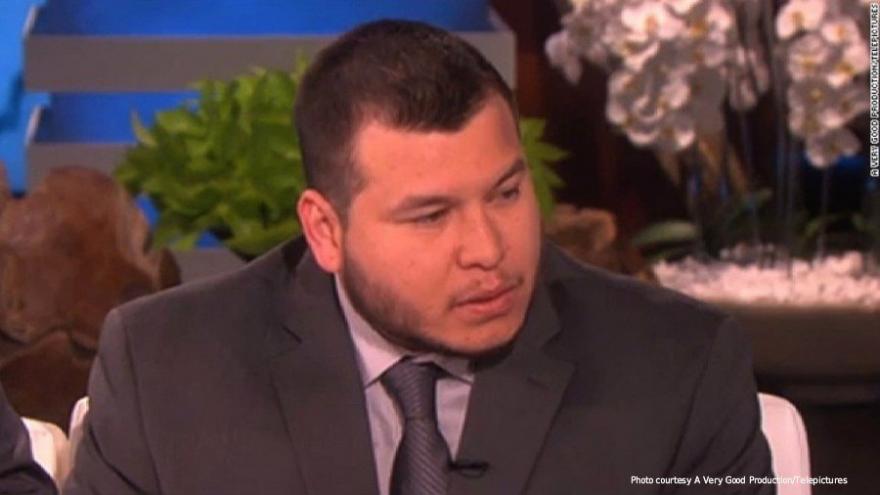 (CNN) -- The security guard who approached Las Vegas gunman Stephen Paddock's hotel suite before the massacre said he heard "drilling sounds" before he was shot through the door.

In an episode of "The Ellen DeGeneres Show" set to air Wednesday, Jesus Campos recounts for the first time on TV the night of the shooting.

Campos was wounded by Paddock on October 1, minutes before the gunman sprayed gunfire on concertgoers at the Route 91 Harvest Festival from a hotel room in the 32nd floor of the Mandalay Bay Resort Casino.

Paddock killed 58 people and left nearly 500 concertgoers wounded. It was the deadliest mass shooting in modern US history.

More than two weeks after the attack, Campos said his health is improving.

Campos had been in the building, patrolling the halls when he was sent to check on a door on the 32nd floor. He used the stairwells to get there, but couldn't get past a barricaded door and had to use the elevator.

"There was metal bracket holding the door in place," he said. "That was just out of the ordinary."

He said he called security dispatch to report the blocked door and that's when he heard drilling sounds. He thought people were working in the area.

"As I was walking down, I heard rapid fire." Campos said, speaking softly and appearing nervous. "And at first I took cover. I felt a burning sensation. I went to go lift my pant leg up and I saw the blood. That's when I called it in on my radio that shots have been fired."

Paddock shot through the door, striking Campos in the upper right thigh.

"And I was going to say that I was hit, but I got on my cell just to clear the radio traffic so they could coordinate the rest of the call."

While hiding in a doorway, Campos alerted a hotel building engineer who was called to check on the door and a woman who came out of another room.

The building engineer, Stephen Schuck, told DeGeneres that he heard what he thought was the sound of a jackhammer on the 32nd floor but realized it was too late at night.

"Within milliseconds," Schuck said, "if he didn't say that, I would have got hit."

Campos also told a woman to get back insider her room.

He thanked first responders, medics and members of the community who helped everyone in need that night.

"Everything puts pieces together on how everyone came together to help that night even in the darkest hour," he said.

"As each day passes, we're working to get over this," Schuck said.

Campos had been scheduled to appear on several news networks last week but those interviews were canceled.

"Jesus Campos wants to tell his story at a time and place of his choosing. He's asked that everyone respect his request for privacy. We could not be more proud of Jesus," MGM said.

Campos was hailed a hero by authorities, who initially said he diverted the gunman's attention and made him stop firing on the crowd.

But last week, authorities said Campos was shot six minutes before the shooting on the crowd started, then changed that assessment.

The resort's owner had disputed the times provided by police, and said Paddock was shooting at concertgoers "at the same time as, or within 40 seconds after" Campos first reported shots. The latest police timeline essentially agrees with that.