Selena honored with star on Hollywood Walk of Fame 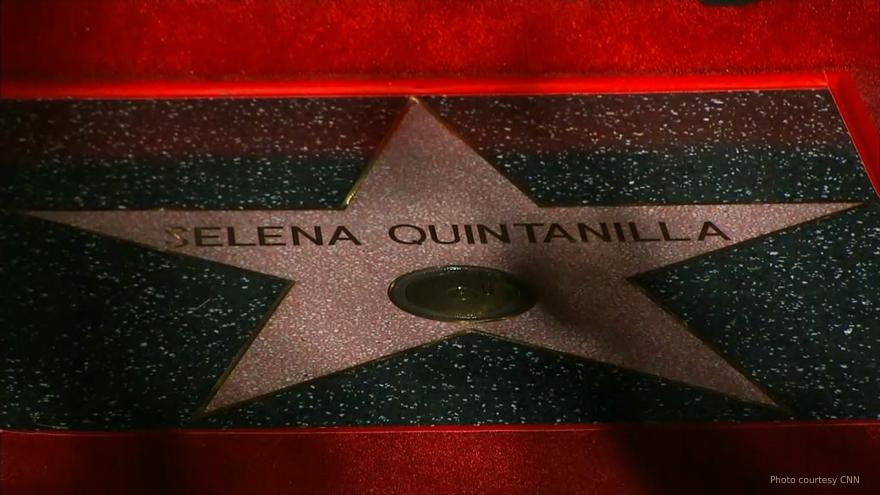 (CNN) -- The legacy of singer Selena Quintanilla has lived on for more than two decades. Now the "Queen of Tejano music" has joined a constellation of stars in the Hollywood Walk of Fame.

The singer simply known as Selena was honored Friday with a posthumous star in one of showbiz's most visible landmarks.

"While she was taken from us way too early, we now have something permanent that generation after generation can see in the most famous neighborhood anywhere in the world," Los Angeles Mayor Eric Garcetti said.

The Grammy-winning singer was shot dead 22 years ago by the president of her fan club.

At the time, she was breaking concert attendance records and her albums were at the top of the music charts. She was known for hits that include "Bidi Bidi Bom Bom," "Dreaming of You" and "Como la Flor."

Selena's family and fans attended the ceremony, along with actress Eva Longoria, who said the singer had a big influence on her career and identity.

"Growing up, there was not a reflection of me anywhere," Longoria said. "It was like someone like me didn't exist in American mainstream."

"This star isn't just for Selena, but for all Latinas," the actress said.

Selena was among 34 entertainers selected from 300 candidates to receive a new star this year.

The singer has become even more famous after her death.

Her life and subsequent murder were the subject of a 1997 biographical film "Selena" starring Jennifer Lopez, which has become a cult classic for fans.

She has sold more than 65 million albums worldwide.

MAC Cosmetics has a line inspired by Selena and last week, Google's Doodle paid tribute to her on the 28th anniversary of the release of her first studio album.

Fans expressed delight over the unveiling of the singer's star.

"It shouldn't have taken this long for Selena to get a star on Hollywood's walk of fame. I'm just saying. She's the best," Magaly Miranda Alvarez tweeted.

"So happy Selena is finally getting her star on the Hollywood Walk of Fame today," she tweeted. "Tears of joy for her and her family!"